The only VRI system with a prescription you can see at the panel.

Reinke was the first to introduce GPS technology into the control and management of center pivot irrigation systems in 2002. Reinke was also the first to introduce touch screen technology to our line of control panels in 2009. Now Reinke is the first in the industry to integrate variable rate irrigation (VRI) with Touch Screen control and end-of-system GPS. If you already have a Reinke Touch Screen control panel and Navigator GPS, you can get started without any additional components.

Features of the Reinke system:

(2) Use a professional service to gather soil, elevation data and other hard data to create multiple, extremely accurate prescriptions while also providing the ability to determine the return on investment of both sector and zone VRI.

Optimize water distribution. Maximize every plant’s potential.
Whether for several crops in one field, rolling terrain, drainage issues, changing weather patterns or everything mentioned, Reinke variable rate irrigation lets you apply precise amounts of water for numerous field scenarios. Reinke also provides the capability of using multiple irrigation prescriptions (Rx) for each field that can be easily changed so you can adjust to changing water needs throughout the season. Bottom line, there’s never been a better way to efficiently apply water and maximize every plant’s potential. 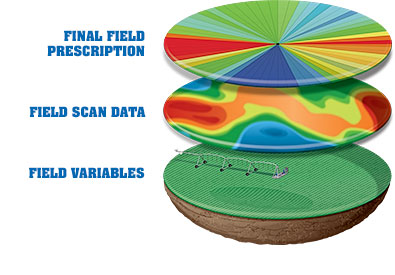 Three simple steps.
In just a few steps, your field topography goes from raw data, to a final prescription to running on your touch screen control panel.

3. In-field download you can see. The new Rx is loaded from a USB drive, the base water depth is set and you’re ready to go. There’s no guessing involved because the Rx is always visible on your Reinke Touch Screen control panel assuring you everything is performing properly.

Sector VRI is accomplished by segmenting the pivot path into 2 or as many as 180 pie-like slices. Each unique irrigation depth is accomplished by altering the pivot speed at each slice. The Rx may concentrate on the outer 30% to 50% of the pivot circle, which accounts for 50% to 75% of the total area within each slice. Each slice can vary down to two degrees or less than one percent of the total pivot area to provide maximum control of the water being applied. Application depth can be easily adjusted higher or lower without changing the Rx. 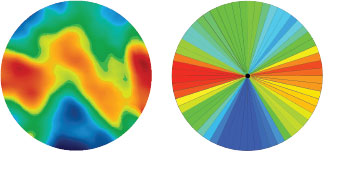 Find new potential. Zone VRI divides the pivot area into 2 or as many as 36 zones (rings) around the pivot point. When combined with the segmenting sectors,  an even higher level of precision is made possible with the use of more than 6400 differently managed zones. Irrigation rates are achieved through sprinkler banks that can be controlled individually, allowing almost unlimited water application combinations. Variable Frequency Drive Pumps may be required to minimize pressure fluctuations from the changing rate of system flow resulting from turning the sprinklers on and off. Some additional components are required for zone VRI including independently controlled sprinkler valves and an air compressor. 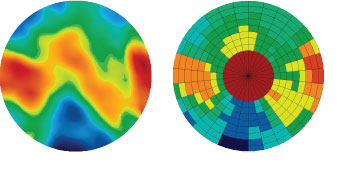 To learn more about benefiting from Reinke VRI, call or visit your Reinke dealer or call our Grower’s Hotline (toll-free) at 866-365-7381.